Skip to content Skip to navigation
See our Campus Ready site for the most up to date information about instruction.Campus ReadyCOVID Help
Life & Environmental Sciences

A few places on Earth are known as nature's best laboratories for studying evolution - the Galapagos Islands, the Antilles, and the freshwater lakes of British Columbia, for example. 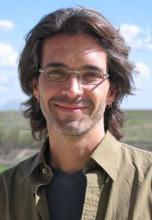 For Professor Michael N. Dawson of UC Merced's School of Natural Sciences, seawater lakes in Palau, New Guinea, Indonesia and Vietnam provide prime opportunities to study rates and patterns of evolution in marine species like jellyfish. These lakes are the marine equivalent of islands, where small, geographically isolated populations can demonstrate high levels of local adaptation.

In a current project, Dawson cooperates with the Coral Reef Research Foundation to monitor long-term weather variations in Palau and how they might affect the population dynamics of jellyfish in a seawater lake there.

He says studying these lakes may yield information that can help preserve protected marine areas closer to home, like California's Channel Islands.

"We';re finding increasing evidence that the links between populations in different ocean locations are weaker than previously thought," Dawson said.

That means the ocean is less homogenous than people think, and the things he's learning in his far-flung research areas might apply even in less isolated marine environments.

Dawson runs three Web sites to unite collaborators around his research interests. It has been useful because many of the richest areas for studying evolution- places like the Middle East and Southeast Asia - have the fewest scientific resources. He also plans collaborations with other scientists at UC Merced who study evolution in all kinds of environments.

And although his new professorial duties will curtail his travel habit somewhat, Dawson doesn't appear to mind.

"We're doing a really important job, serving this community," he said. "It's challenging. But the students are keen and bright. They need challenge and opportunity, and UC Merced has the resources to help them develop good skills for learning."

"That's the best place to get advice and work through problems," he said. "I love to have students visit me in my office."