Counting the number of species that live in the Earth’s oceans sounds as impossible as counting the grains of sand on a beach.

But a global collaboration involving a UC Merced researcher and a graduate student is doing just that, and found that about a third of all the oceans’ species are still undescribed.

That doesn’t mean they cannot be counted, though. 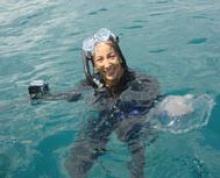 Professor Michael Dawson, a jellyfish expert, and graduate student Liza Gómez Daglio contributed information about these invertebrates to an initiative led by the World Register of Marine Species, an open-access online database.

According to a paper published in mid-November – written by 120 experts, including Dawson and Gómez Daglio – 226,000 oceanic species have been described and there are another 70,000 awaiting descriptions in specimen collections.

“There are samples that have been collected from as far back as the 1800s,” Gómez Daglio said. “But they’ve been kept, unexamined, in places like Museum of Comparative Zoology at Harvard University and the National Museum of Natural History Smithsonian."

This is part of a general trend. More species have been described in the past decade than in any previous decade, according to the paper published in Current Biology.

Research like Gómez Daglio’s helps even further as scientists list the species they know and the species they imagine that have not yet been discovered. They expect the majority of unknown species—mostly smaller crustaceans, mollusks, worms and sponges – will be described this century.

That’s why the current estimate of as many as 1 million species in the world’s oceans includes even species that have not yet been found.

The only way to redress this lack of discovery is through the kind of work Gómez Daglio performed in Mexico and Central America, Dawson said. She was one of the first people to conduct a thorough study there.

“I was always amazed by the beauty of the jellies, but no one was working on them,” Gómez Daglio said. “When Professor Dawson took his position here, he asked if I wanted to come and get my Ph.D. in jellyfish research.”

Gómez Daglio, who hails from Mexico City, is UC Merced’s first student through the UC Institute for Mexico and the United States (UCMexus), a program hosted by UC Riverside. She came here in 2007, and plans to graduate in fall 2013.

She wants to continue working with Dawson on various projects, she said. Having her work included in the recently published paper is an honor, but it’s also the result of all the hard work she has put in to help further knowledge in the field.

Earlier estimates of ocean diversity varied widely because there was no global catalog of marine species.

The World Register of Marine Species, overseen by the Intergovernmental Oceanographic Commission of UNESCO, represents 146 institutions and 32 countries. It contains 95 percent of described species and is continually being updated as new species are discovered.

Someday, a similar collaboration could be used to inventory all the life on Earth.

“The work people do in taxonomic inventories isn’t highly rewarded – it’s not the kind of work that gets cited often,” Dawson said. “But it’s really important.

“Scientists are convinced we are living in a period of unprecedented species loss, and that it’s directly attributable to humans,” Dawson said. “We need to know what is being lost and where. There’s a lot of value in biodiversity – robust ecosystems, clean air and water, food, and even human health. But unless we know how many species there are and where, it’s hard to assess the costs of the losses, or to place a value on what we still have.”