Skip to content Skip to navigation
See our Campus Ready site for most up to date information about the fall semester.Campus ReadyCOVID Help
Life & Environmental Sciences

Chemical Biology Lab Creating DNA-based Nanomachines that can Self Assemble 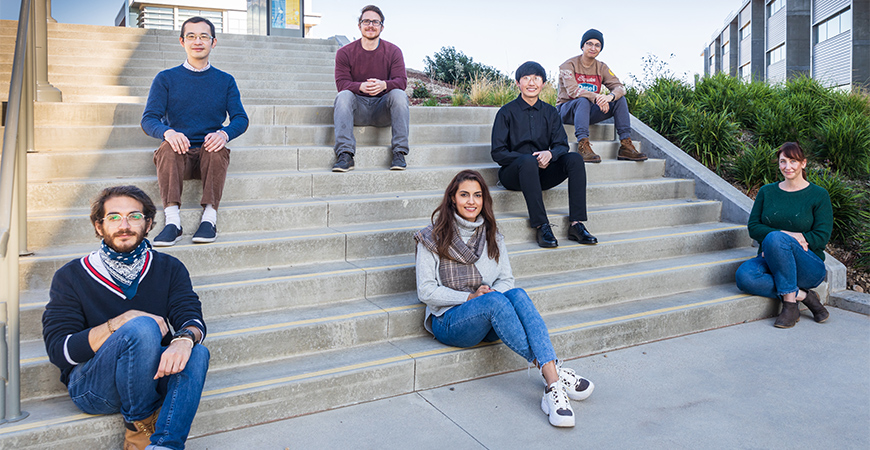 Professor Tao Ye, center left, and the student researchers in his lab

Professor Tao Ye and colleagues have received a $1.18 million grant from the Department of Energy to study how DNA molecules can arrange themselves into nanostructures that could form the basis of nanoelectronic circuits.

All living things are the products of self-assembly, a process in which proteins and other molecules arrange themselves into elaborate structures according to the “blueprint” encoded in DNA. Researchers in the field of DNA nanotechnology have discovered methods that allow DNA molecules to fold themselves into a variety of artificial nanostructures.

The Ye lab group, in the Department of Chemistry and Chemical Biology, is using these DNA nanostructures to develop biosensors with a wide range of applications in medicine. But the self-assembly process can also be used for non-biological applications by building larger structures that can feature prominently in energy harvesting and circuits for computers, among other areas.

Companies such as Intel use a process called lithography to create nanoscale transistors from semiconductors and to connect billions of these tiny transistors to create computer chips and microprocessors. But lithography is slow, takes many repetitions and is difficult to use to build smaller and smaller structures.

“Instead of relying on lithography, wouldn’t it be great if molecules and circuit components assembled themselves into devices? We want to learn from nature’s tricks to create highly complex and functional biological structures and repurpose self-assembly to create materials to convert energy or create complex circuits,” Ye explained.

“The nanoscale arrangements of biomolecules, such as proteins and DNA, underlie a wide spectrum of biological functions,” Ye said. “But our ability to measure and control them is very limited.”

Over the next three years, working with their partners at Duke and Emory universities, Ye and his students will used advanced microscopy techniques to understand how the DNA nanostructures order themselves, why defects happen and how to overcome them.

They hope the experiments will lead to more predictive models on how these structures form. They also aim to create a way to allow the tiny structures to connect to each other so they can scale themselves up into specifically shaped, larger assemblies.

“We have the molecule to seed them for the larger shapes, we just need to understand the process,” Ye said. “We’re pushing the envelope here.”