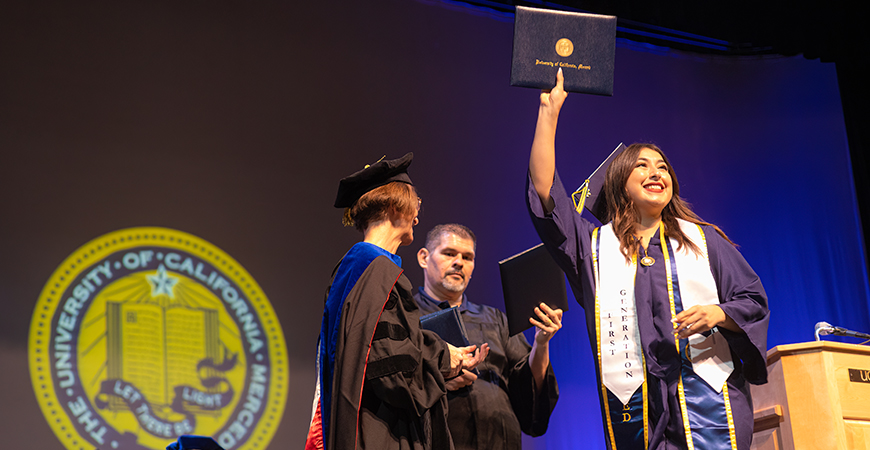 Neither chilly temperatures nor a thick blanket of dense fog could dampen the smiles and spirits of hundreds of Bobcats as they participated in UC Merced's Fall 2022 Commencement. Nearly 450 graduates took part in three separate ceremonies at the Art Kamangar Center at the Merced Theatre.

"The Class of 2022 has persevered through challenges and overcome obstacles — never more so than during the pandemic — and these graduates leave UC Merced more prepared than ever to succeed in their careers and in their lives," Chancellor Juan Sánchez Muñoz said. "They are boldly setting out to contribute to a world that desperately needs their ideas, problem-solving abilities, passion, and their willingness to explore, create and innovate."

The festivities kicked off Friday evening with the inaugural Graduate Division Commencement Ceremony, which celebrated the accomplishments of 12 master's candidates and 33 Ph.D. candidates.

Duval Johnson ('14, '18) served as the keynote speaker for the graduate ceremony. While at UC Merced, he earned bachelor's and doctoral degrees in mechanical engineering, and was also part of the Fundamental Tribology Lab. He currently works at NASA's Jet Propulsion Laboratory (JPL) in Pasadena.

Johnson was born in Downey. When he was 8 years old, he and his family moved to Mariposa, where he said his story of courage began.

"As a young boy, I remember overcoming tremendous amounts of fear to perform in front of others in my first piano recital, my first wrestling match, or to aim my motorcycle towards the biggest jump on our property," he said. "I can tell you that mistakes were made at that recital, matches were sometimes lost, and I still have the scars from that first big motorcycle jump."

Johnson dropped out of high school during his junior year and enlisted in the U.S. Army after he turned 17 in 1986. After his service, he moved to Merced, where he attended Merced College and then transferred to UC Merced in 2012. Now, he leads the Applied Tribology Lab at JPL and has been instrumental in various missions, including the Mars Perseverance rover.

"This journey would not have been possible without the courage to make hard choices and the dedication required to endure," he told the crowd. 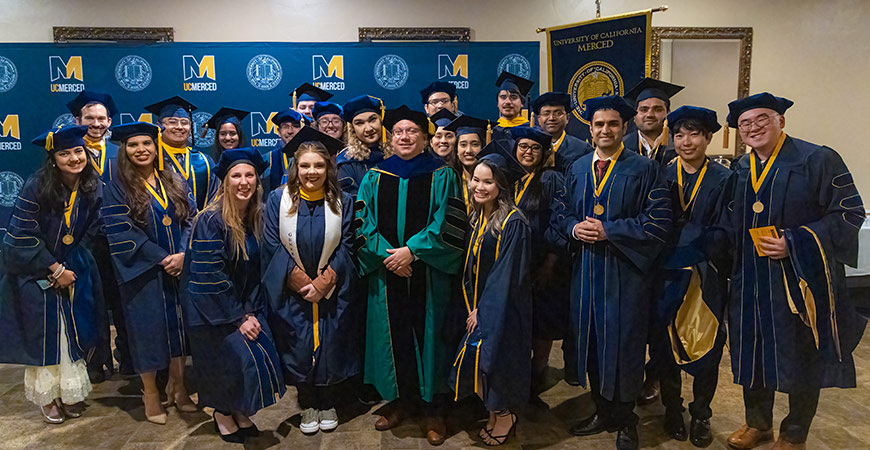 For the first time, UC Merced graduate students had their own commencement ceremony.

Max Espinoza was the keynote speaker for Saturday's ceremonies. He is a senior program officer at the Bill & Melinda Gates Foundation, where he focuses on advancing educational equity and economic mobility in the United States. The first-generation college graduate holds a Bachelor of Arts degree from UCLA and a master's degree in education from Harvard University.

Espinoza served as the 24th student regent on the University of California Board of Regents. In that role, he was an active member of the Special Committee on UC Merced, charged with overseeing the creation of the 10th UC campus, and also was a member of the UC President's Advisory Committee on the selection of the first UC Merced chancellor.

In his speech, Espinoza shared how the creation of UC Merced was never a given, and that it took hard work and collaboration to make the campus come to fruition.

"With fierce competition for state resources and as the new kid on the block, UC Merced was automatically the underdog — and there were always some who did not believe a new campus should be built at all," he said. "Chancellor Carol Tomlinson-Keasey was a very hard-working and convincing person, but she knew that was not enough. So, with determination, she enlisted everyone to the cause, regardless of their title or position. Everyone was mobilized to help make UC Merced a reality."

Espinoza said when things get tough, he thinks back to his time as an undergraduate student to remind himself of who he was then and to refuel his ability to keep fighting. He suggested the undergraduates take a similar approach as they geared up to cross the stage.

"Acknowledge the hard work it took to get here today. But also remember who you were and who you became through this journey," Espinoza said. "Hold on to that. Hold on to that feeling, to the idealism and to the belief that anything is possible."

Nearly 550 students became alumni with the completion of the fall semester; and 448 students participated across the three commencement ceremonies. Students who completed their coursework over the summer were also invited to join in commencement.

People who would like to learn more about the Class of 2022 or view video recordings of all three ceremonies can check out UC Merced's Commencement Chronicle. 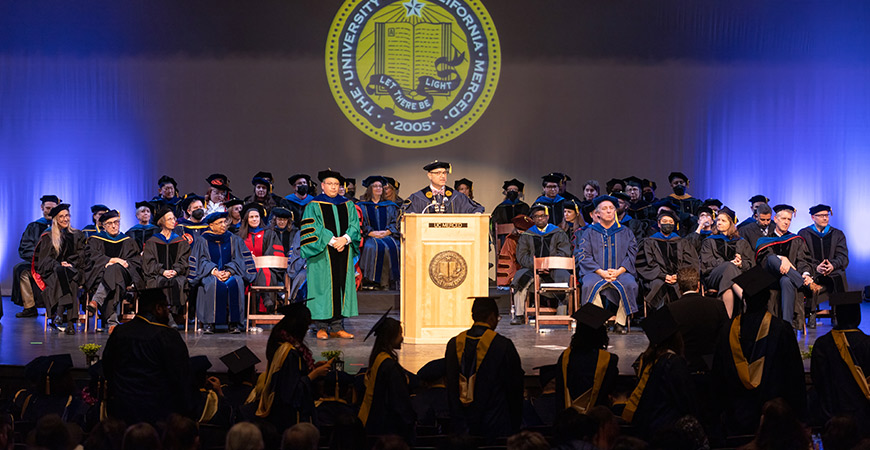 All three commencement ceremonies were held at the Art Kamangar Center at the Merced Theatre.